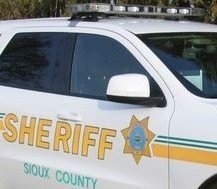 HULL, Iowa - The Sioux County Sheriffs Office  continues its investigation of an accident Friday afternoon on Highway 18 that sent all occupants to hospitals, two with serious injuries.

An officials report states 25 year-old Keegan Robinson was driving westbound on Highway 18 in a Kia Sorento, one mile west of Hull. As Robinson approached the intersection with Harrison Avenue, Christopher Kelderman, 36, of Doon, who was northbound on Harrison driving a Ford F350, failed to stop for the stop sign. Kelderman entered the intersection. The two vehicles collided, then entered the north ditch and rolled.

Kelderman was transported by the Sioux Center Ambulance to the Orange City Hospital for treatment of his injures.

Robinson and his passenger, 19 year-old Jordan Jacobsen, both of Le Mars were initially transported by Hull Ambulance to Sioux Center Health; and then flown to Avera Mckennan Hospital in Sioux Falls, for further treatment of serious injuries.

Alcohol is believed to be a factor and the accident remains under investigation. The sheriffs office Technical Accident Investigator assisted in the investigation.