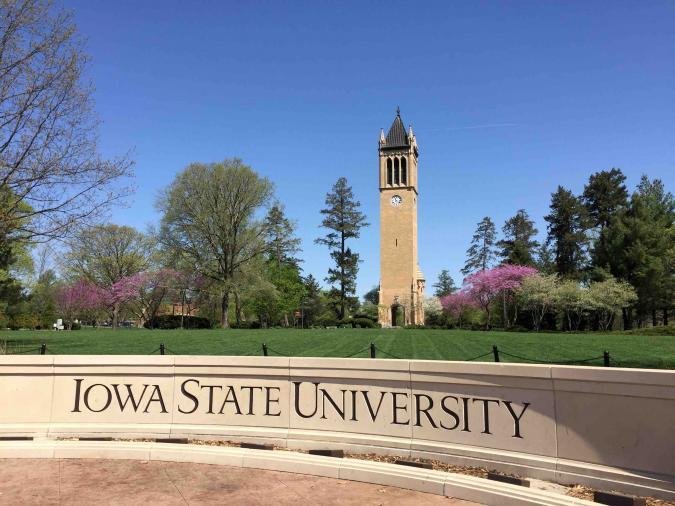 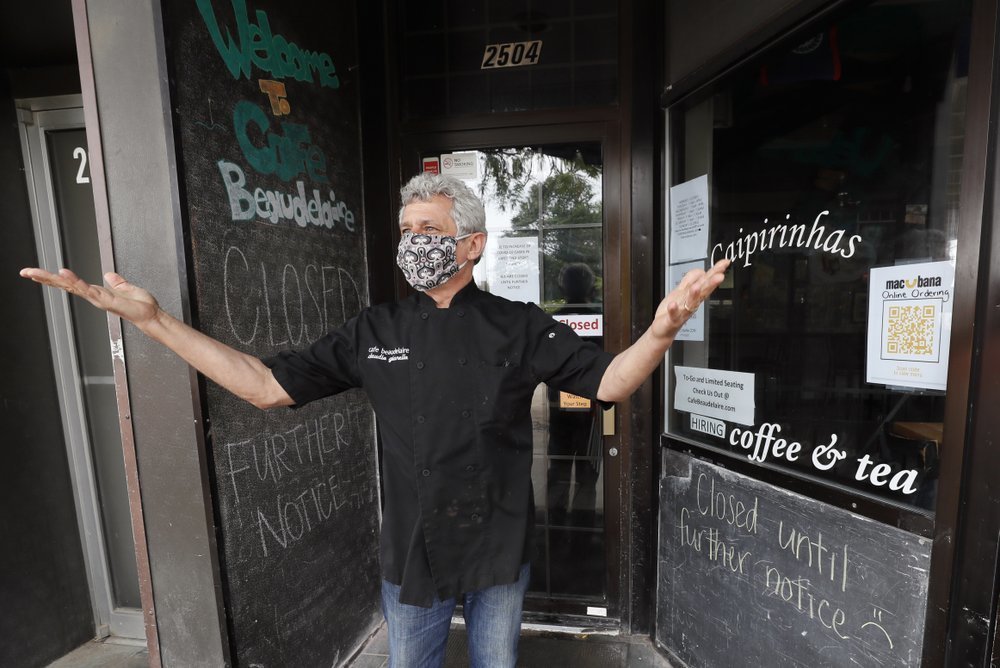 Owner Claudio Gianello stands in the doorway of his temporarily closed Café Beaudelaire restaurant, Tuesday, June 23, 2020, in Ames, Iowa. Within a few weeks of Gov. Kim Reynolds opening bars and restaurants to customers again two major college cities in Iowa are seeing spikes in coronavirus cases among young adults between 19 and 25. In Ames the surge is serious enough to prompt several owners of restaurants and bars near the Iowa State University campus to close voluntarily just weeks after reopening. (AP Photo/Charlie Neibergall)

Business owners in Iowa have welcomed the governor’s move to end most restrictions that had been imposed over the spring to slow the spread of the coronavirus, but some in Ames and Iowa City now are unsure what to do as cases rise. The cities are home to Iowa State University and the University of Iowa, the state’s largest colleges.

“The governor opened up bars and all of a sudden, it’s like all great but it’s not,” said Claudio Gianello, owner of Café Beaudelaire and Macubana restaurants near the Iowa State campus. “Once the bars opened, it exploded.”

Gianello said he saw bars crowded with young people who didn’t observe social distancing and then heard about the increasing case numbers. He decided last week to close his restaurants again just three weeks after reopening.

Because his staff is mostly young, he plans to test his workers and have meetings to inform them of the importance of staying healthy, staying home when they’re sick, wearing masks and cleaning thoroughly.

Other Ames campus area businesses posting closure notices due to the coronavirus include Stomping Grounds, a coffee shop and Welch Ave. Station, a bar.

Story County, where Ames is located, had 135 coronavirus cases in the week ending June 6 and had been relatively stable. About two weeks ago the trend upward began, and as of Monday, the county had posted 500 positive cases, a 270% increase in two weeks, said Les White, Story County Public Health director.

“The greatest increase has been over the last two weeks. Prior to that, we were really relatively low and doing relatively well then all of a sudden it was just kind of a boom,” she said.

The increase is mostly among adults aged 19 to 25, White said. It’s a group that is very social in settings where masks and social distancing is not occurring.

The time frame of the spike in positive cases coincides with the governor’s order allowing bars to reopen with limited social distancing on June 1. Bars and restaurants could open completely without restriction on June 12.

The situation is similar in Johnson County, home to Iowa City, where there were 800 positive cases as of Tuesday, a 30% increase from the 616 total positives posted as of June 1. An obvious spike in case numbers occurred around June 15. As in Story County, most of those testing positive were younger than 25.

“As we saw those restrictions being lifted, thinking about your average incubation period and things, you know, I think we’re definitely seeing the result of that,” said Sam Jarvis, community health manager for Johnson County Public Health.

Other areas of the United States have reported similar trends among young adults.

At a U.S. House hearing Tuesday, members of the committee from Florida and Texas expressed concern about spikes in cases among young adults.

Dr. Anthony Fauci, the director of the National Institute of Allergy and Infectious Diseases, said the coronavirus is confusing because some people don’t get sick or are mildly ill while others die.

“It’s a very difficult message when people say I’m young, I’m healthy who cares? Well, you should care. Not only for yourself but for the impact you might have on the dynamics of the outbreak,” he said.

In Iowa, hospitals in Ames and Iowa City haven’t seen a surge in admissions, as many of the younger individuals testing positive report mild symptoms. While that’s good for the individual, it also means people testing positive likely are active in the community and potentially spreading the virus.

“If those persons are not being mindful and quarantining or staying home when they’re sick, it’s just increasing chances that they might spread it to someone else and certainly we hope it’s not in any of our older adult populations or others who have other medical vulnerabilities,” Jarvis said.

Reynolds has insisted that Iowa is well into its recovery stage, and last week she named a board of business executives to help lead the effort toward economic recovery. The Republican governor said the state will respond to virus surges with more testing, but she has also noted it’s up to individuals to decide how they will deal with the virus.