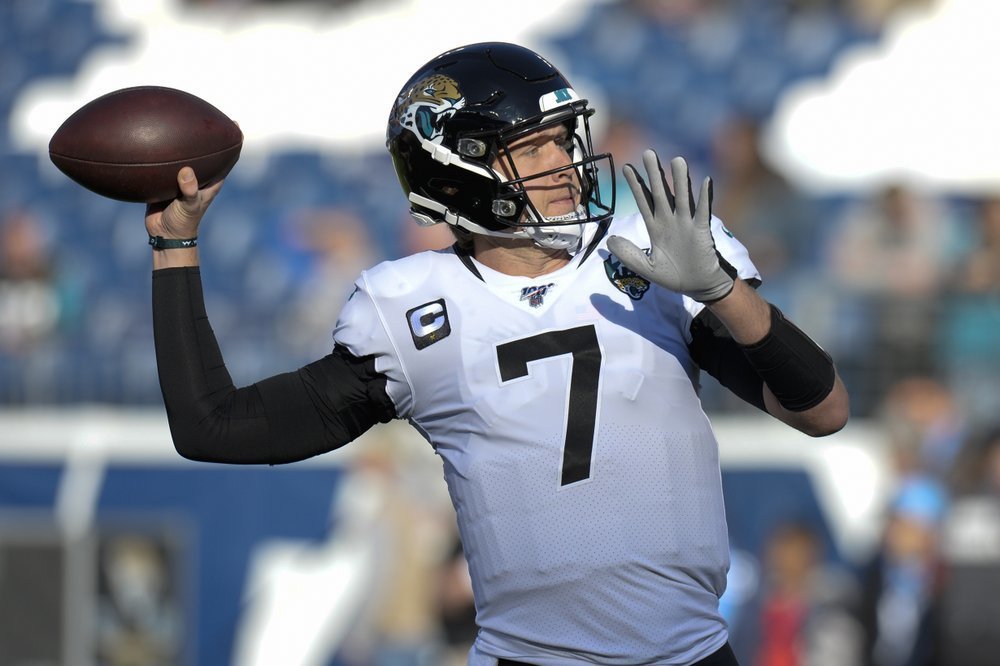 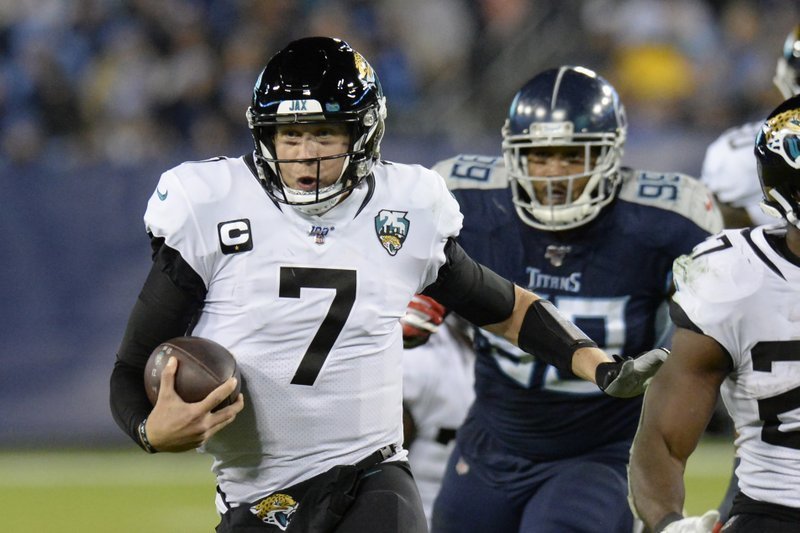 In this Nov. 24, 2019, file photo, Jacksonville Jaguars quarterback Nick Foles (7) scrambles against the Tennessee Titans in the second half of an NFL football game in Nashville, Tenn. A person familiar with the trade says the Jacksonville Jaguars have agreed to send quarterback Nick Foles to the Chicago Bears for a compensatory fourth-round draft pick. The person spoke to The Associated Press on condition of anonymity because trades don't become official until the league year begins later Wednesday, March 18, 2020. (AP Photo/Mark Zaleski, File)

JACKSONVILLE, Fla. (AP) — The Jacksonville Jaguars are trying to mitigate one of the costliest mistakes in franchise history. The Chicago Bears could benefit from the purge.

The Jaguars agreed Wednesday to trade quarterback Nick Foles to the Bears for a compensatory fourth-round draft pick, according to a person familiar with the transaction. The person spoke to The Associated Press on condition of anonymity because the trade was not yet official.

The Jaguars are dumping Foles a little more than a year after giving the 2018 Super Bowl MVP a four-year, $88 million contract that included a whopping $50.125 million guaranteed.

The Bears are getting a veteran starter to compete with Mitchell Trubisky, who struggled in his third season. They are expected to rework Foles’ contract, which has three years remaining.

Foles is due to make $15.125 million in 2020 and would have counted $21.837 million against Jacksonville’s salary cap. Dealing him will still be costly for the Jaguars — they will take on $18.75 million in dead money this fall — but it will free up about $35 million over the next two years. Jacksonville saves a little more than $3 million in 2020 by trading him.

The Jaguars are in full rebuild mode after their 10th losing season in the last 12 years. Last March, owner Shad Khan, general manager Dave Caldwell and coach Doug Marrone raved about Foles and what it meant to finally have a franchise quarterback after a decades-long search that saw Jacksonville try Byron Leftwich, David Garrard, Blaine Gabbert, Chad Henne and Blake Bortles.

But the 31-year-old Foles ended up being the latest bust in Jacksonville. He broke his left collarbone early in the season opener, missed the next eight games and then got benched in his third game back.

Jacksonville had been willing to keep Foles as a high-priced backup. But a wild carousel of QB moves to open free agency — Philip Rivers to Indianapolis, Tom Brady reportedly to Tampa Bay and Teddy Bridgewater to Carolina — created a market for Foles.

Now, he heads to the Windy City.

Bears general manager Ryan Pace has made it clear the team is committed to Trubisky despite his regression in 2019. Pace largely tied his reputation to Trubisky by trading up a spot with San Francisco to draft him with the No. 2 overall pick in 2017, ahead of Kansas City’s Patrick Mahomes and Houston’s Deshaun Watson. While Mahomes and Watson have emerged as two of the best quarterbacks in the league, Trubisky has mixed some promising flashes with poor decisions and even worse throws.

The Bears were hoping he would take a big step forward last season — his second in coach Matt Nagy’s system — but that did not happen. His yards (3,138), completion rate (63.2%), touchdowns (17) and rating (83) all dropped from the previous year.

He was the most coveted free-agent quarterback on the market in 2019 after leading Philadelphia to four playoff victories over two seasons, including the franchise’s first NFL title since 1960. He earned 2018 Super Bowl MVP honors and a season later made himself the league’s top QB commodity.

Jacksonville will turn to Minshew for the foreseeable future. Joshua Dobbs will serve as Jacksonville’s backup. The Jags traded a fifth-round pick to Pittsburgh last September for Dobbs.

The Jaguars topped that by trading Foles and raised their two-year total for paying quarterbacks to not play for them to $35.25 million.

The upside for Jacksonville: Caldwell and Marrone now have 12 picks in the upcoming draft, including seven in the first four rounds.