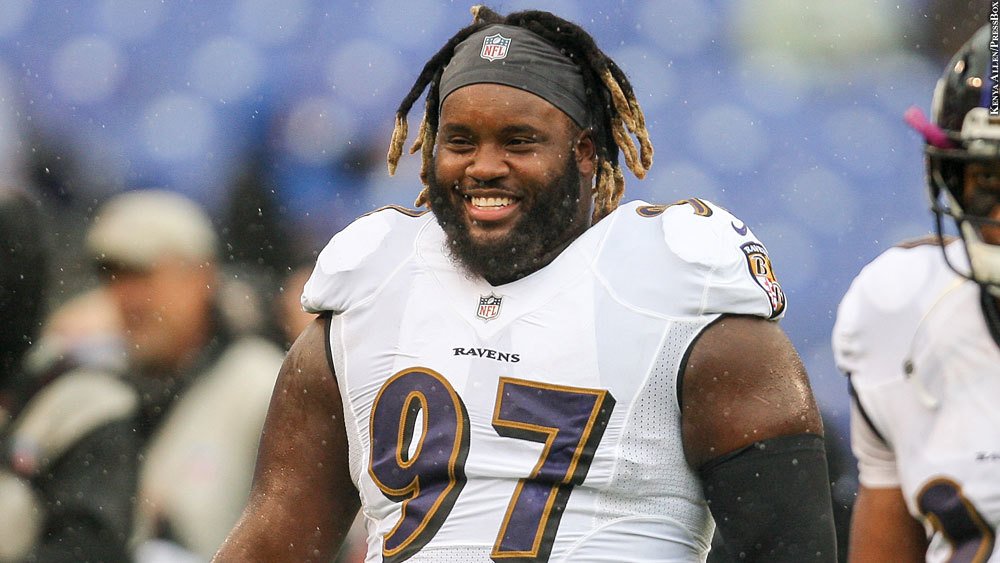 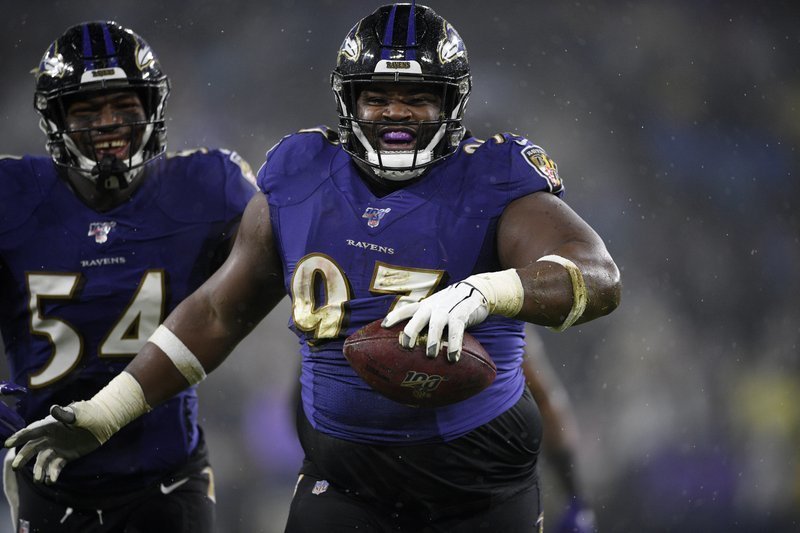 In this Sunday, Dec. 29, 2019 file photo, Baltimore Ravens defensive tackle Michael Pierce (97) celebrates his fumble recovery with linebacker Tyus Bowser (54) during the first half of an NFL football game against the Pittsburgh Steelers in Baltimore. Michael Pierce has agreed to terms with the Minnesota Vikings, Wednesday, March 18, 2020. (AP Photo/Nick Wass, File)

MINNEAPOLIS (AP) — Michael Pierce will bring an exceptional amount of strength to the Minnesota Vikings, whenever they’re able to convene once concern about the coronavirus spread has subsided.

He’ll fit right in, because there’ll be a lot of heavy lifting to do on a defense that will have a decidedly different look.

“I would believe I’m at least in the top 10 stronger guys in the NFL, so yeah, man, I have a sheer love for weightlifting. I’d be doing that if I wasn’t playing football,” Pierce said Friday on a conference call with reporters. “I’d probably be trying to try out for the Olympics or join the USA Olympic weightlifting team. So, yeah, I take pride in it. I’ll let the videos speak for themselves and my play on the field speak for itself, but yeah, that’s been a hobby of mine ever since I’ve started.”

Pierce, who agreed to a three-year, $27 million contract with $18 million in guaranteed money with Minnesota after four seasons with Baltimore, went undrafted out of FCS program Samford. He eventually muscled his way into the starting lineup. There’s plenty of visual evidence to be found online of his power, including a 725-pound squat he once performed in college. The 6-foot, 345-pound Pierce is agile enough, too, to do a cartwheel.

That love for weightlifting undoubtedly helped the Alabama native overcome the odds of sticking in the league out of a small school. It also worked against him last year. Pierce was so focused on his power-training program he neglected his fitness and nutrition, showed up at 390 pounds for minicamp, causing Ravens coaches to hold him out of those practices.

“Mismanaged my cardiovascular program very, very bad. That’s due to me just doing my own thing and not being under a trainer’s wing,” Pierce said. “I wasn’t eating as well as I could, and I was more worried about lifting weights than running as much as I should have been. So I went through that last spring and got myself in shape this summer and passed the conditioning test, and I was ready to go, man. I totally overhauled everything that I’ve done.”

Pierce dropped 30 pounds before training camp last year, when he was hampered by an ankle injury but started 14 games. Pierce said his optimal playing weight is 345 pounds.

So far the only outside free agent the Vikings have added, Pierce will be counted on to help stabilize a defense from which five starters have departed: end Everson Griffen, tackle Linval Joseph, and cornerbacks Xavier Rhodes, Trae Waynes and Mackensie Alexander. Three key backups, defensive end Stephen Weatherly and safety Jayron Kearse and Andrew Sendejo, have also joined other teams.

Griffen’s agent, Brian Murphy, announced Friday they ended talks with the Vikings “because they have to spend their money elsewhere and we decided to now focus our attention on free agency.”

The longest-tenured player on the team, Griffen accumulated 74 1/2 sacks in 10 seasons. The 32-year-old posted a goodbye message to Minnesota on his Instagram account.

“When I came to Minnesota as a fourth-round pick out of USC, I had no idea how much my life would change over the next 10 years. I realized my dream of playing in the NFL, went to four Pro Bowls and came within one game of playing in the Super Bowl in front of the best fans in the country. More importantly, I became a husband, a dad, and met teammates who became brothers for life. I also stumbled a few times on my journey and could not be more grateful for the unconditional support and love I received from SKOL Nation. While it is with a heavy heart that I say goodbye, I leave Minnesota in the best physical and mental shape I have ever been and have many Pro Bowl seasons to come! Wherever my next stop is, I will always be grateful to and cheering for the Vikings. Thank you all for the love, support and memories,” Griffen wrote.